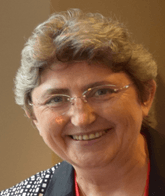 Roumiana Tsenkova (RTs) has pioneered the area of non-invasive disease diagnosis with near infrared spectroscopy and multivariate analysis. She and her groups at University of Ruse, Bulgaria and, since 1996, her group at Kobe University, Japan, have developed series of algorithms for in-vivo, in-vitro diagnosis and for better understanding of mammary gland inflammation (mastitis) in cows and bacteria identification.

In 2005, R.Tenkovas proposed a new “omics” discipline called Aquaphotomics in an attempt to build up a data base of water absorbance bands specific for each biological and aqueous system called aquaphotome and to use it for diagnosis and characterization on a system level. In 2009, R.Tsenkova published 12 characteristic water bands found underneath the first overtone of water to be activated in different combination in various biological systems under perturbation. With Aquaphotomics she could explain why very low concentrations of solutes in water could be measured with Near Infrared Spectroscopy, which has been defined as “impossible” from a traditional point of view. She coined up the term “water mirror on molecular level” when using infrared light as she proved that the water molecular network “mirrors” the rest of the solution.

Recently, RTs has proposed a new way of simple illustration of the active water bands as a system characteristic called aquagram and have used it as a diagnostic kit for estrus detection and water contamination.

Roumiana Tsenkova has written more than 23 chapters in books, 120 papers and 17 patent applications. She has been a PI for more than 21 projects. She is the recipient of the Japanese Near Infrared Society Award for 1998 and the Tomas Hirshfeld International Near Infrared Spectroscopy Award for 2006. She is a member of the Editorial board of Japanese and International Journals.