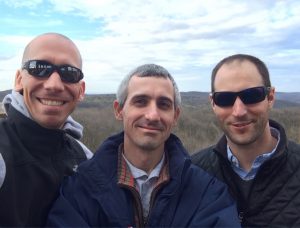 There is a little group in the middle of Europe consisting of three young research fellows having devotion towards NIR spectroscopy and the related instrumentation, data evaluation techniques, software and programming.

One of the fellows, Dr. Bernhard Pollner <bernhard.pollner@mac.com> from Austria, graduated to MD at Innsbruck Medical School in 2004. He has been working as an independent researcher consultant in the field of water science since his graduation. During his scientific activities Bernhard acquired a good knowledge of many different methods in this field. One of his special interests lies in complex algorithms and high-throughput computations using R, a free software environment for statistical computing and graphics. Since his three months stay in Professor Roumiana Tsenkova’s laboratory, at Kobe University, Japan, together with the other two fellows Zoltan and George, he worked on various projects in the field of NIRS and Aquaphotomics. He is currently a PhD student at University of Innsbruck, Austria.

George Bazar, PhD <bazar@correltech.hu>, one of the Hungarian fellows, started learning about NIRS as a PhD student in Professor Robert Romvari’s laboratory at Kaposvar University in 2005. Later he was mentored by Professor Karoly Kaffka who motivated him to attend the next IDRC in Chambersburg. At this meeting in 2008 George met many pioneers of NIRS, among them the famous Karl Norris considered to be the father of NIR spectroscopy, and Roumiana Tsenkova who introduced him Aquaphotomics. Thanks to this acquaintance, after defending his PhD in 2011, he successfully applied for a JSPS postdoc position at Professor Tsenkova’s laboratory, where he spent two years. Half a year after his arrival Zoltan joined the same team, and they started working together on different research topics in the field of Aquaphotomics. George returned to Hungary in 2014 and since then he has been working at Kaposvar University as Research Fellow. His valuable work has been awarded by the Postdoctoral Fellowship Grant in the frame of the New National Excellence Program of the Hungarian Government.

The second Hungarian fellow, Zoltan Kovacs, PhD <kovacs@correltech.hu>, started his scientific activity in the field of instrumental taste sensing and defended his PhD diploma in 2012 in the topic of the problems with electronic tongue measurements. He gained knowledge about experimentation, uni- and multivariate data analysis related to the above mentioned topics, which gave him the opportunity to apply to Professor Tsenkova’s laboratory where he learned the basics of NIRS and Aquaphotomics techniques working together with George and later with Bernhard. Zoltan returned to Hungary in 2016 and works at his home university, Szent István University, Budapest, as assistant professor and beside his original field he makes great efforts to do research in the field of NIRS and Aquaphotomics. His work has been awarded by the Janos Bolyai Postdoctoral Research Grant given by the Hungarian Academy of Sciences.

George and Zoltan realized the high importance of the stability of the spectrometers when the Aquaphotomics approach was applied and started to pay attention to the stabilization of the experimental arrangements, widening the knowledge of Aquaphotomics with their observations. While Bernhard and Zoltan have been working to develop dedicated software for Aquaphotomics calculations since they met in Japan.

Bernhard, George and Zoltan continuously look for the opportunities to extend the research of NIRS and Aquaphotomics and they keep working on research projects with Professor Tsenkova at Kobe University, but they are willing to build collaborations with other groups, too.

Beside the academic presence they have founded a consulting company in Hungary, Correltech Bt., to provide a more flexible way of collaboration of researchers related to NIR spectroscopy and other correlative analytical technologies worldwide. They all were invited to the scientific team of Tellspec Inc., an innovative data company offering real-time food analysis with a small handheld NIR spectrometer connected with a cloud-based analysis engine.

These research fellows aim to build a wide international scientific cooperation in NIR spectroscopy, multivariate data analysis, and in the field of possible applications. Therefore, they are ready to support cooperation with their knowledge in instrumentation, experimentation, data evaluation, software and programming.